Our drop-In session at the United Reform Church on Long Causeway, every Friday has now ceased, why not keep us on your favourite list and check back regularly for any future events that we may hold. You can always contact us on the enquiry form listed under Contact Us

In 2018, at one of the Friday drop-in sessions we held at Longcauseway Church, we were visited by a gentleman who brought some artwork and a sketchbook which his elderly neighbour had given him, saying that she had been in possession of them for many years, but she was not related to the artist.

To our surprise and great joy the signatures on these works were those of Luke Clegg Leadbeater, whom we recognised instantly as one of the men whom we had researched and who sadly died in World War 1.

Luke was born in Newcastle upon Tyne in 1898. His father was also Luke Leadbeater, a Dyer and later a Template Maker at an Ordnance Works, born in Gomersal in 1864 and died in 1899. His mother was Sarah Elizabeth (nee Clegg) born in Staincliffe, Batley in 1864 and died in 1917. They were married in 1885.

On the 1901 Census the family lived at 15, Elswick Road, Newcastle and in 1911 at Back Fern Royd, Huddersfield Road, Dewsbury.

Luke was unmarried but had a fiancée. He attended Ravensthorpe United Methodist Church and Sunday school. He was employed by Messrs Jas Smith and Sons as a Glazer.

He was also a very talented artist and attended Dewsbury School of Art where his works were featured in exhibitions and received merit awards.

He enlisted on February 14th1917 serving as Private 26576 in the 1st/5th Duke of Wellingtons (West Riding Regiment) and was sent to the Western Front on 11th October 1917. He was killed in action on 22nd November 1917 at Zonnebeke near Ypres during the Battle of Passchendaele and was buried in the field. In 1919 his remains were reburied in Aeroplane Cemetery, West-Vlaanderen, Belgium. Luke was awarded the British War Medal and the Victory Medal.

His lifelong friend George Ledgard was killed at Cambrai the following day. They had both attended the same Church, Sunday school and both had worked at Jas Smiths. Lance Corporal Arthur Sheard wrote to Luke’s fiancée Sarah giving the details of his death; he had been sheltering in a dug-out in the trenches when a shell came over killing him and another soldier.

Luke is commemorated on the Dewsbury Cenotaph in Crow Nest Park and in the Dewsbury Roll of Honour kept in Dewsbury Central Library and on the Ravensthorpe War Memorial in St. Saviours Church and on the Memorial Plaque in the porch of the now closed St. Matthew’s Church, Westtown. 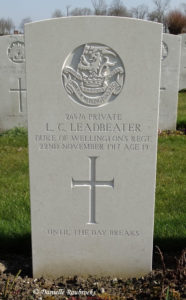